Once Upon a Time...Morning Time 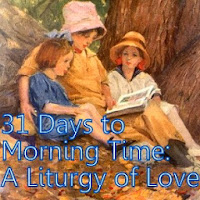 25 years ago, about last Friday, my oldest son was 4 almost 5.  I was pregnant with my 4th child. I was nauseated. I remember it well. I sat on the couch with my three little boys and we read nursery rhymes and practiced for Awana. Sometimes I fell asleep. Once, as the little boys played on the couch and I slept, an electric candle tipped over and burned a hole in the couch. Thankfully, God gave me a good sense of smell which our whole family learned to trust over the years.

I didn't like that dark house we were living in but we were soon going to move to a little blue house on a pond where many happy memories would bud and bloom, but I didn't know that yet. I just woke up each morning, felt nauseated, and read to the boys. Then we acted out nursery rhymes and took long walks which usually ended with me carrying two and sometimes three people home. So much for strollers.

Someday, not long from now, you may visit me in my old age as I sit and rock and perhaps you will catch a hint of the voices in my head. I put them there one grain at a time. Perhaps if you could live long enough you would see other old men (and one lovely woman) in other rocking chairs and you would hear those same voices echo in their heads too. "Old men forget but all is not forgotten."

Once upon a time we had Morning Time.

The voices in my head:

"Wynken, Blynken and Nod one night sailed off in wooden shoe..."

"Once upon a time their were four little rabbits Flopsy, Mopsy, Cottontail and..."

"Christopher Robin has wheezles and sneezles they bundled him into his bed..."

"In all of France there was no mouse more beloved than Anatole..."

"It was very early Christmas morning, and in the stillness of the dawn, with the soft snow falling on the housetops, a
little child was..."

"Little Black you are the best pony in the whole world...."

"Listen my children and you shall here of the midnight ride of Paul Revere..."

"I never really knew Father very well until we moved to the ranch..."

"Christmas won't be Christmas without any presents..."

"They tell us, Sir, that we are weak unable to cope with so formiable an adversary..."

"Marley was dead; dead as a doornail..."

“When the fiddle had stopped singing Laura called out softly, "What are days of auld lang syne, Pa?"
"They are the days of a long time ago, Laura," Pa said. "Go to sleep, now."
But Laura lay awake a little while, listening to Pa's fiddle softly playing and to the lonely sound of the wind in the Big Woods,…
She was glad that the cozy house, and Pa and Ma and the firelight and the music, were now. They could not be forgotten, she thought, because now is now. It can never be a long time ago.”

Thank-you for joining me on these 31 Days of Morning Time.

"He that goeth forth and weepeth, bearing precious seed, shall doubtless come again with rejoicing, bringing his sheaves with him."<
Posted by Cindy at 6:46 AM